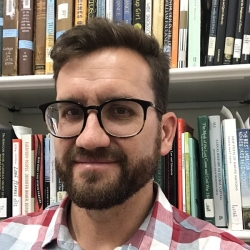 Will Clark came to SF State after teaching English and American Studies at the College of William & Mary. Previously, he taught courses on 19th Century, 20th Century, contemporary queer literature, and U.S. literature and the law at UCLA, where he received his Ph.D. His teaching emphasizes the ways in which historical formations around sexuality, race, gender, and nationality contextualize how we understand social, legal, and literary movements in the present. By tracing historical evolution in queerness and by looking at literature alongside period documents in U.S. politics and the law, his courses build reading practices that apply literary methods to other contexts and genres.

In addition to his teaching, his research focuses on modes of legal, literary, and social belonging and/or exclusion. Through the rubric of citizenship, he examines how changing visions of the citizen and the performance of citizenship have either enabled or restricted social and legal membership, with a particular interest in the intersection of race and sexuality. He is currently working on a book project, “Perverse Citizens: U.S. Fiction and the Conception of Queer Rights,” which argues that a strain of U.S. fiction at the turn of the twentieth century depicts the emergent category of queerness by challenging the exclusion of queer subjects from the fullest extent of U.S. membership. Before beginning his academic career, he worked in the nonprofit sector in the Bay Area. His work has appeared in the Henry James Review and he regularly contributes reviews and essays to the Los Angeles Review of Books.

Please consult your course syllabus or contact the instructor directly for office hours.